Saskia Straub is the Research Assistant for Net Zero Business Solutions at Oxford Net Zero. In her position she works on expanding and improving the net-zero tools database, to make effective and ambitious decarbonisation solutions more accessible to organisations.

Saskia strives to use systems thinking to accelerate ambitious decarbonisation in the private and public sectors. Previously Saskia researched the potential for sectoral greenhouse gas agreements with Prof. Eugenie Dugoua. She also worked as a Research Assistant for the Transition Pathway Initiative at LSE’s Grantham Institute for Climate Change where she determined the compliance of firms with the Paris Climate Agreement.

As the elected Student Union Environment and Ethics Officer of theLondon School of Economics and Political Science, Saskia was a member of the Sustainability Advisory Group, chaired by Lord Nicolas Stern. In this role, she was fundamental in contributing to decisions like LSE becoming the first carbon neutral university. She was also a member of the EY Future Leaders Board she also advised major corporations and high-level UK policymakers on how to ceate synergies to scale up environmental goals in the lead-up to COP26.

Saskia holds a BSc in Environment and Development from the London School of Economics and Political Science for which she received a First Class Honours. Her dissertation on the oil and gas industry’s climate change discourse between 2010-2019 was nominated for the Royal Geographic Society Climate Change Research Prize. She holds a scholarship for academically gifted students by the prestigious German Scholarship Foundation, awarded to students who can be expected to make an outstanding contribution to society. Saskia is currently an MSc+MPhil student in Environmental Change and Management at the University of Oxford. 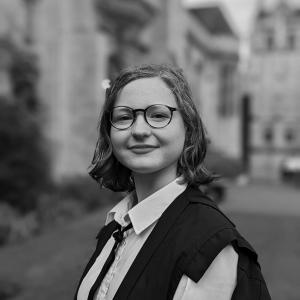